Check out the two sequels with Saul Garnell on Amazon!

I don’t remember it very well.

I do remember Bob.

Bob Mecoy.  I’d met Bob through my friend Lou Stathis.  Lou was a freelance editor, writer and good guy.  I was staying in New York for a few months to babysit an apartment, with the idea I’d get to know the publishing community.

His wife, Robin, worked at Starlog Magazine, and was editor of FUTURE.

Cool!  They used to have salons.  They’d just gotten back together after a split.  Both journalism studenst from the University of Oklahoma, somehow they seemed the coolest Okies I’d ever met.   In any case, years passed from the mid seventies when I met them, and by then Bob had a job at Dell Publishing.

“Even done a novelization?”

“I think you are right for this screenplay.  I mean to novelize it.”

Bob wasn’t crazy about my writing, but he recognized something in it that he could use.  Dell had just picked up the rights for this movie. Mind you these were the days when novelizations could sell very well indeed.  William Kotzwinkle’s novelization of E.T. was on the top of the bestseller’s list for uncounted weeks.

Oh yes folks.  And I do meant typewriter!

This is the 30th Anniversary of the movie WarGames.   I was lucky enough to get the job novelizing the screenplay.   In the next few editions of the blob I’ll be talking about that experience and about WarGames.

NIGHT OF THE DRAGONSTAR

NIGHT OF THE DRAGONSTAR

second book in the Dragonstar trilogy.

Would love a review!

THE NEXT BIG THING 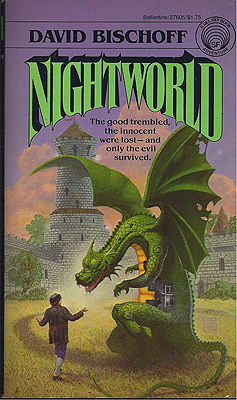 CHECK BACK AT THIS POST, AS I WILL BE ADDING TO IT.

THE NEXT BIG THING seems to be some kind of web chain mail project to reach out to folks about writing projects.  I was contacted by Phill Berrie about this and I’m thrilled to try it out.

Phill’s own version is at:

1) What is the working title of your next book?

2) Where did the idea come from for the book?

It will be the third in a series. FIrst book was NIGHTWORLD. Second book was VAMPIRES OF NIGHTWORLD.

3) What genre does your book fall under?

4) What actors would you choose to play the part of your characters in a movie rendition?

5) What is the one-sentence synopsis of your book?

All the questions posed by the first two books will be answered.

6) Will your book be self-published or represented by an agency?

7) How long did it take you to write the first draft of the manuscript?

It’s not written yet.

8) What other books would you compare this story to within your genre?

UNIVERSE by Robert A. Heinlein

9) Who or what inspired you to write this book?

10) What else about the book might pique the reader’s interest?

This book will be much different than if I had written it in the 80’s for Del Rey Books, although I am using an outline I wrote back then. I’ve thought about this final book a lot and I’ve come up with some amazing new ideas.

Again, check out Phill’s NEXT BIG THING at:

NBC OLYMPIC COVERAGE GETS THE KINKS OUT

But NBC didn’t show it!

If you are as outraged as I am, you can email

I will vent on this more later.